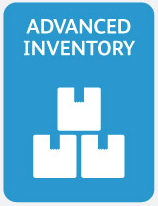 Advanced Inventory module for QuickBooks Enterprise offers a number of practical features for Small Businesses. Among them are:

Advanced Inventory module is included in the Platinum subscription which can be rather costly for some users. We would be going over the following functions in this post:

This feature is one of the most popular ones. Many small businesses consider using barcodes to improve their inventory management. It was possible to track barcode values for the inventory in QuickBooks Custom Fields before Advanced Inventory appeared.

Now QuickBooks has assigned a separate field for the barcodes. You can specify only one barcode for each item.

HandiFox has its own Barcoding feature that does not require the Advanced Inventory module. There are some differences between Barcoding in Advanced inventory and HandiFox. In HandiFox the separate barcode can be assigned for each unit of measure if the item has multiple units of measure in QuickBooks. For example, you can assign 3 different barcodes to the pen (one for each unit of measure) if the pen is associated with each, box and pair units of measure respectively .

This feature lets you track inventory in several warehouses or trucks. It is useful when the inventory is spread across several physical locations and inventory levels should be tracked on each location separately.

In QuickBooks you can create Inventory Sites which represent your warehouses and adjust Quantity on hand values for each site.

HandiFox supports Multiple Inventory Sites as well. If you do not have QuickBooks with AI (you use QuickBooks Premier etc.), you can track Inventory in several warehouses using HandiFox.

If you use QuickBooks with Multiple Inventory Sites enabled, HandiFox seamlessly integrates with your current QuickBooks site layout.

This feature allows you to track items in specific bins within a warehouse. It makes inventory management even more efficient for big warehouses.

HandiFox does not provide such functionality on its own. But if you have bin locations in QuickBooks with Advanced Inventory, HandiFox picks the information off these Bin Locations from QuickBooks and lets you work with them on the mobile device.

Along with that, HandiFox gives you an opportunity to associate each bin location with the barcode and speed up the selection of the right bin by scanning its barcode when transaction is created.

Lot numbers are especially useful for food producers or wholesale companies that track expiration dates as the lot numbers. Serial numbers are mostly used by manufacturers of electronic parts.

Support of serial / lot numbers in HandiFox will be implemented in one of the future releases.